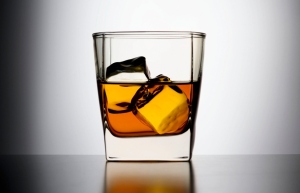 A Frenchman, an American, and an Irishman are sitting at a bar, drinking.

A fly lands in the Frenchman’s wine, and he immediately flings the entire glass across the room, and exclaims, “I will no drink zis MERDE!”

A minute later, a different fly lands in the American’s beer.  The American nonchalantly plucks the fly out of his glass, and tosses the fly to the side.  He then shrugs, and continues to drink his beer.

A few minutes later, another fly lands in the Irishman’s whiskey.  The Irishman plucks the fly out of his drink, holds it over the glass, and starts tapping the fly with his finger, saying, “Spit it out… spit it out!”

Whiskey is highly-valued by those who drink and appreciate it.

For the sake of my own sanity (and American heritage), I’m going to use “whiskey” for the rest of this article.

Whiskey is basically made out of fermented grain that has been distilled.

The reason it has more of a “burning” sensation than other adult beverages is because the alcohol level is usually much higher than beer and wine – starting at 40% ABV, and special varieties skyrocket above 60%.

So Many Types of Whiskey
I thought wine had a lot of varieties, but check out this amazing image from Pop Chart Lab of whiskey varieties.

And that only encompasses some of the major varieties of American, Irish, Scotch, and Canadian.  There are more!

The differences are typically based on various grains being used and how it’s distilled and aged.

Whiskey is in the Eye of the Beholder
Although I’m clearly not a regular imbiber of whiskey, I can certainly respect its unique traits.  Nevertheless, I’d much rather have someone else tell you how magnificent it is.

Quotes from people who love whiskey:

“Whiskey is a taste of the South. No matter where I am, I can be home in just one sip.”  –Sam Lyles

“A good Bourbon can accomplish a smooth warmth like no other. A bad one can still mix well.”  –Jodie Blakey

“I could talk about whiskey all day and still say nothing fantastic about it, because it’s pretty much just perfect.”  –Jarred White

Author
Megan Vogel is a bubbly marketing professional, living in Atlanta, GA. Wine, marketing, and humor are some of her favorite enthusiasms… along with Ikea, and pizza from her hometown of St. Louis, MO. To learn more, visit www.meganvogel.com